Exhibition was based on workshops led by myself, Diran Malatjalian, Khaldoun Hijazin and Ethan Murrow. Preparations for the exhibition began with a workshop led by myself and Khaldoun Hijazin examining intersectionality as a tool to resist entrenched hierarchies. This felt particularly potent at the Jordan National Gallery of Fine Arts in Amman, a city and country at the crossroads of the Middle East, witnessing and ameliorating the interlocked and continuing refugee crises of the 20th and 21st centuries.

Further workshops included video and electronic media strategies led by Diran Malatjanian, and portraiture in response to contemporary ideas of empathy and craft led by Khaldoun Hijazin and Ethan Murrow. 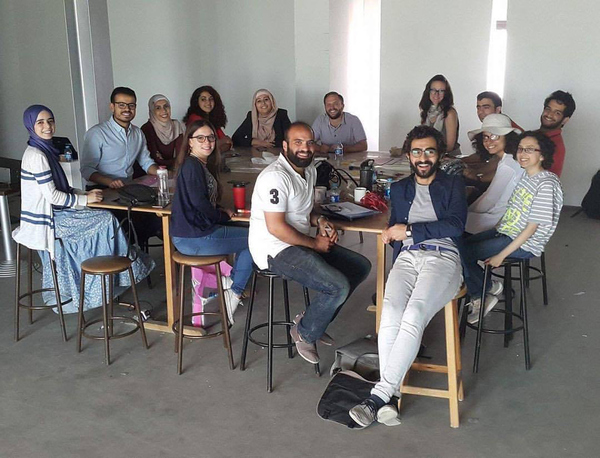 Thinking by Making focused on a series of questions designed to prompt artists to consider spacial and material relationships in connection to their bodies, identities and hierarchies of power The concept of intersectionality was used as a tool to connect artists from differing backgrounds. 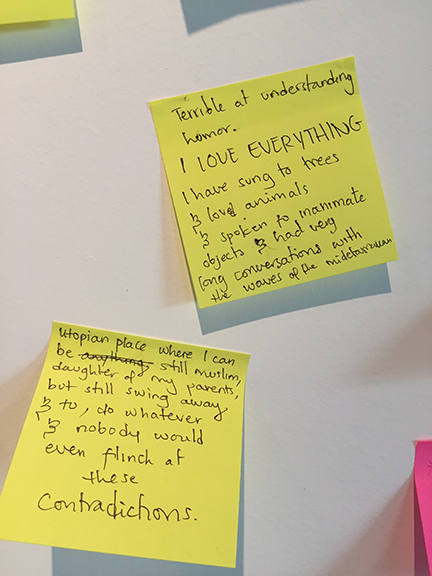 We began with a series of questions and prompts designed to focus artists on the way they have experienced both vulnerability and power in relationship to their physical bodies and identities. The conversation at times got intense, and whenever something that was being said particularly resonated, artists jotted down notes on post its. 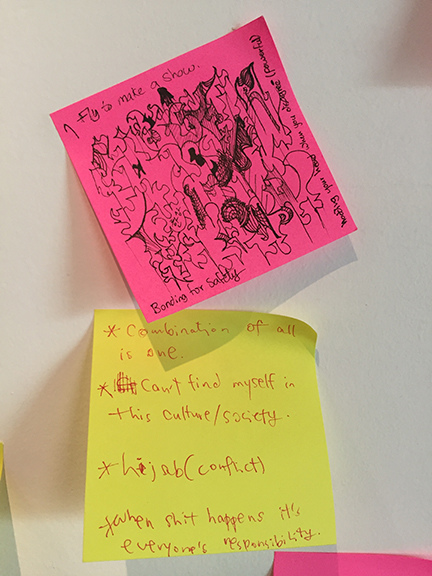 Over the first few days of the workshop, we allowed the post its to accumulate on one wall of the gallery. 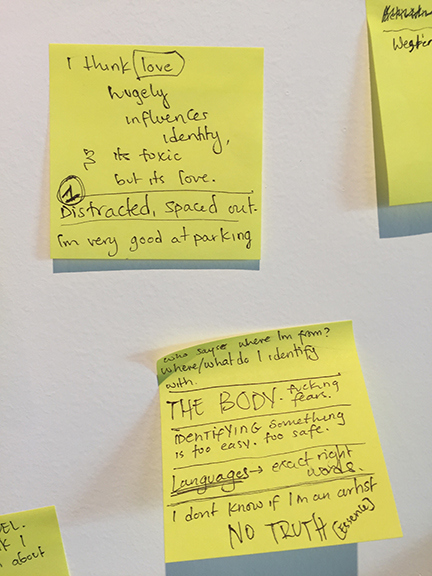 The notes were a great way to reflect on the conversations as they happened. 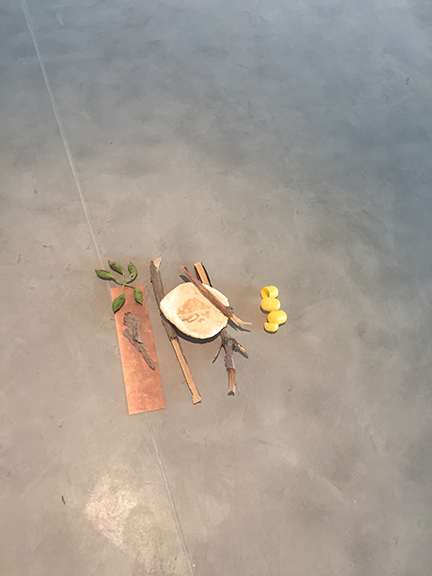 The next step was to explore the physical space of the gallery, to find places that had resonance for each individual artist, whether it was a visual response to the light, or just a sense of liking the way the architecture felt in a particular spot. 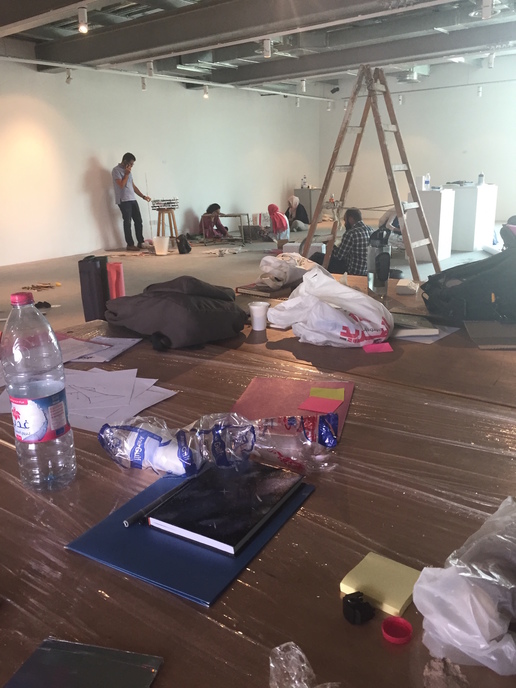 Once artists found a ‘home’ in the space, everyone went out and collected material for building explorations. The idea was to find non-precious materials to allow for free experimentation. It got messy. 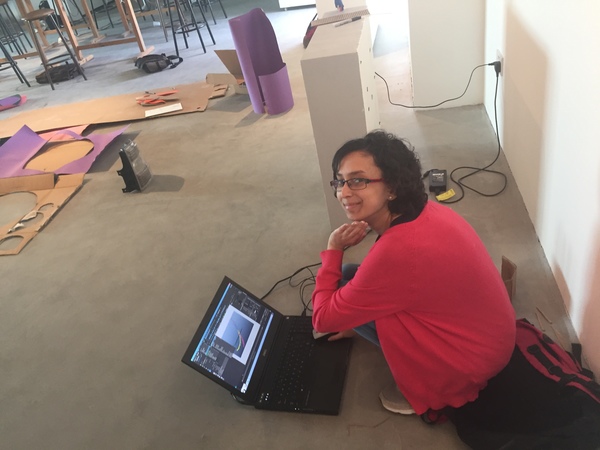 Next, artists began connecting their material explorations with conceptual development. Here, artist and architect Mayada Abu Qdais is designing an abstract animation to interact with a sculptural object. 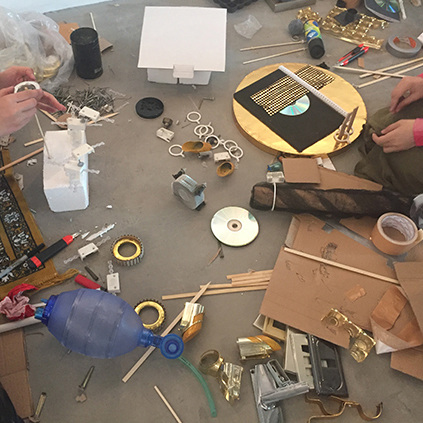 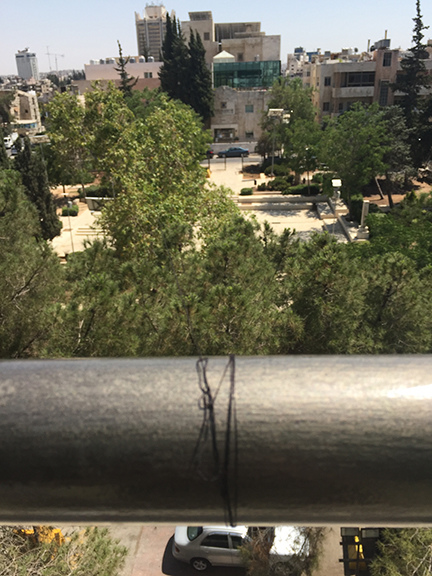 Sama engineered a process by which she was able to run black thread 25 feet above ground, connecting the contemporary gallery to the main building across the sculpture court. 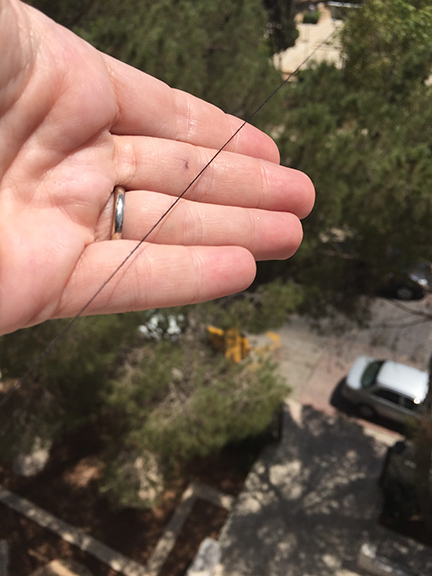 Thread running between the two buildings of National Gallery. The process required running the thread through tree branches and across two busy roads to reach the other side of the sculpture court. 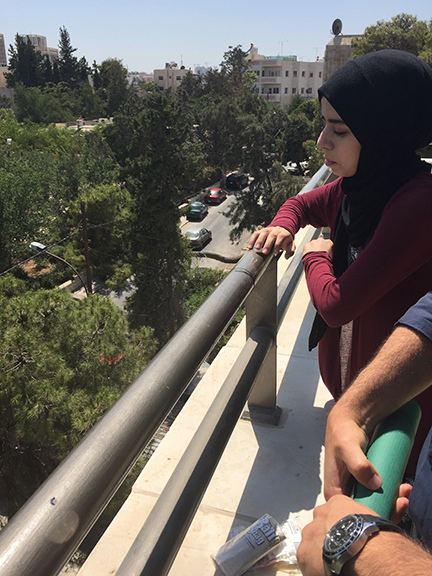 It was fascinating to try to follow the thread with your eye. It was so thin that it was visible only from certain vantage points. 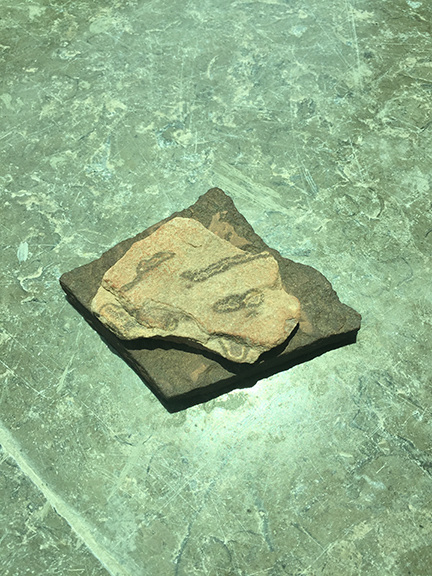 Ahmed spent several days exploring the space of the gallery, walking through and rubbing these two stones together. By creating an audial vibration as he moved, he was exploring using other senses in additional to the visual. 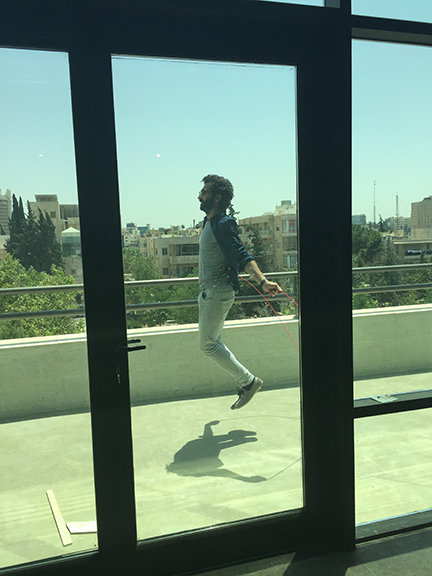 After his exploration with the stones, Ali created a ritualistic performative act in which he would hand stones to a partner, who would rub them together inside the gallery while he jumped rope outside on the balcony. His goal was to be able to intuitively stop jumping rope when the partner stopped rubbing the stones. 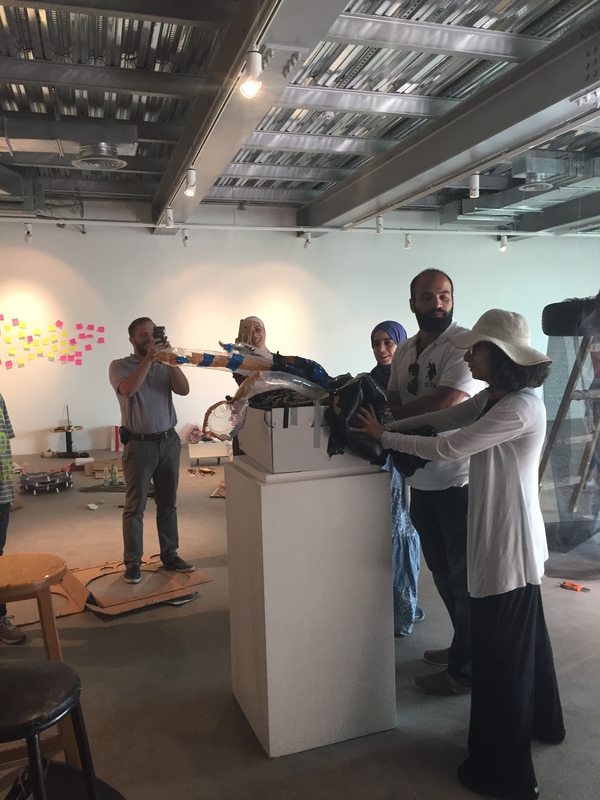 Artist Dina Malkawi's conceptual exploration was around shared breath and shared language, her first version of the piece was cobbled together with found material and took a team of artists to manipulate. 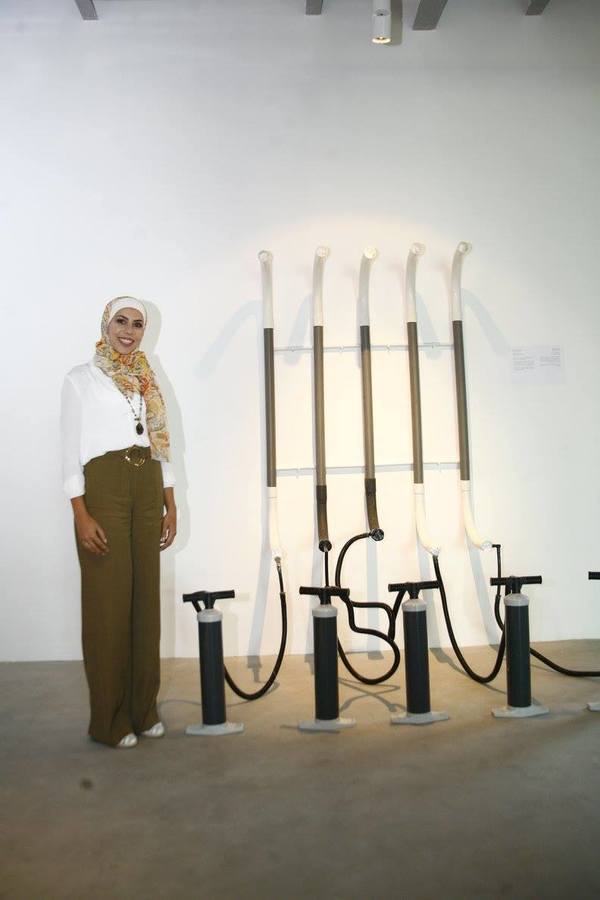 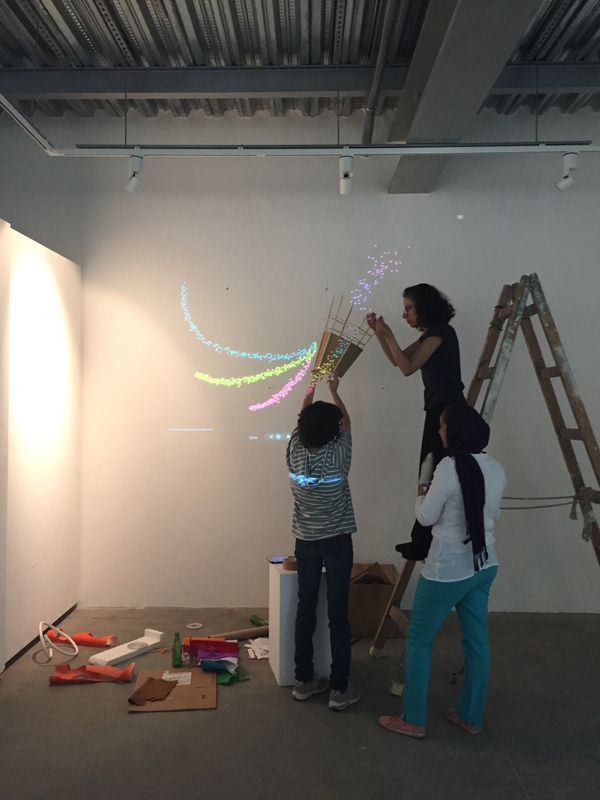 Mayada's continued experimentation with connecting object and animation, she is being assisted by artists Tasneem Jaabo and Lina Sala - artists worked very collaboratively, assisting one another throughout the workshop. 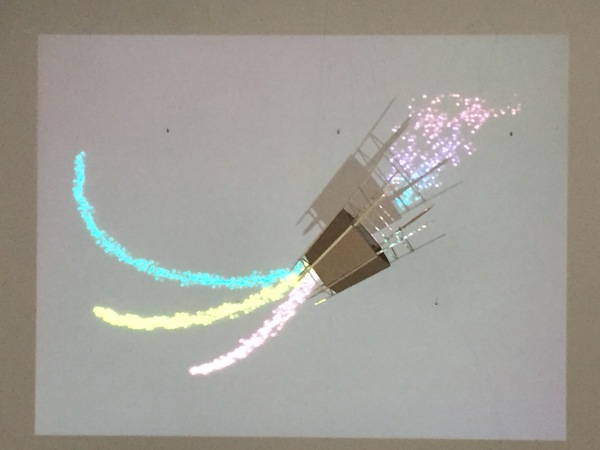 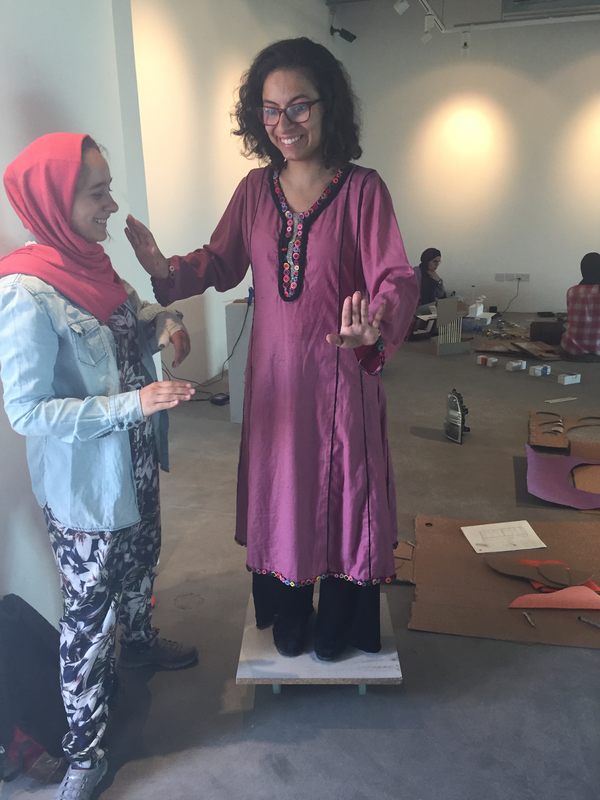 Artist Lina Sala was intent on creating a piece in which two people were needed to create balance. Shown here is experimentation with assistance from a fellow artist. 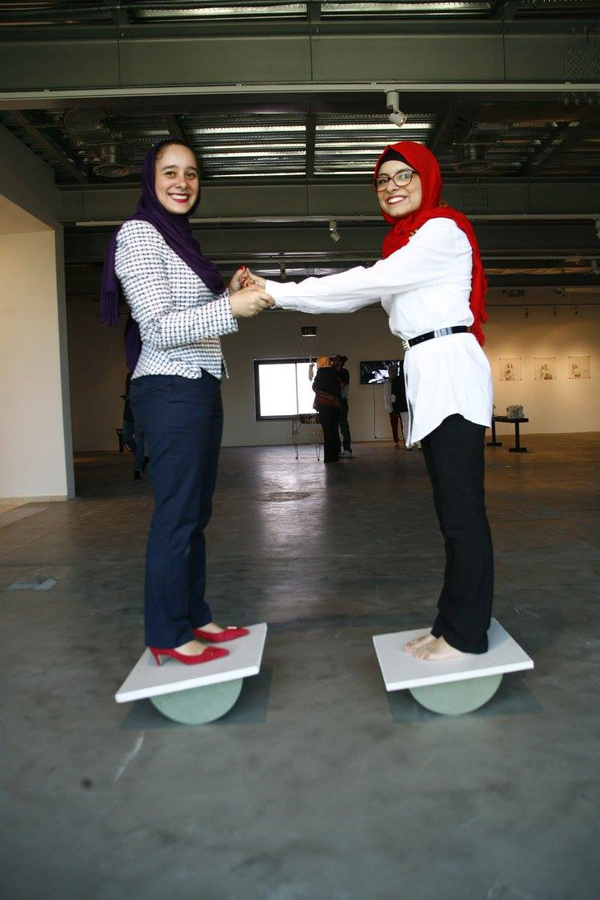 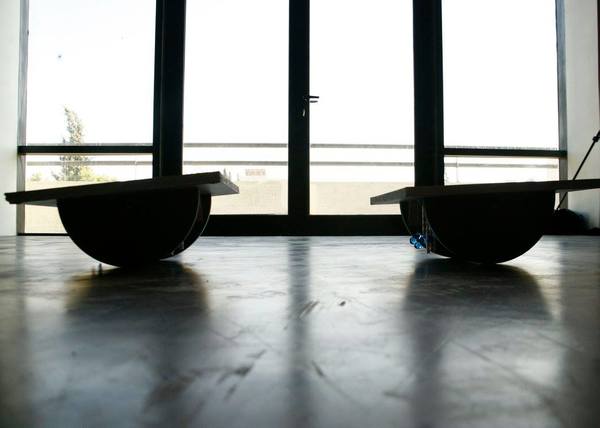 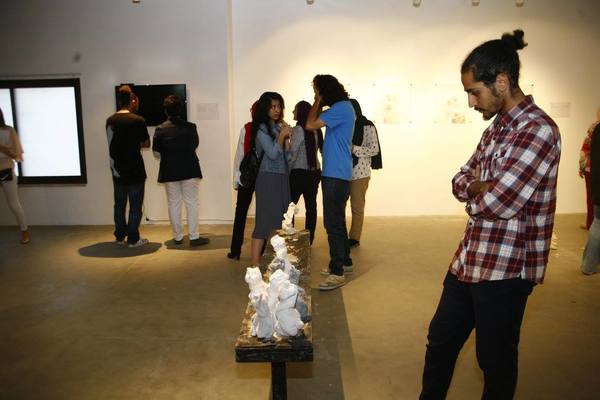 Final Exhibition, Empathy and Craft in the 21st Century
2017 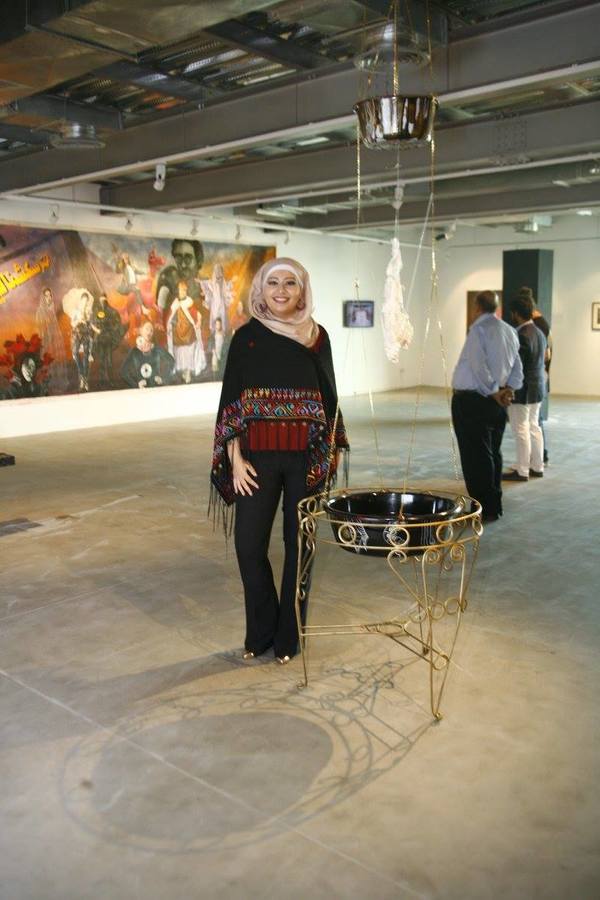